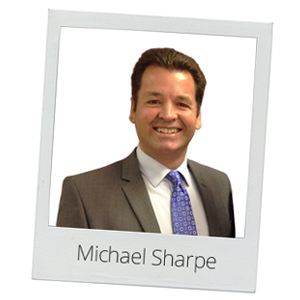 Michael is an active member of the Australian community, a dedicated volunteer, a proven leader, a highly successful family businessman and committed to improving the opportunities for all Australians.

Michael is the eldest son of Carol and Ron Sharpe. "My father is an inspiration to all of us having lived his life quietly helping others in service to the community. Dad was recognised for his service as Gosford City's Citizen of the Year in 2005 and on Australia Day 2006 received the Order of Australia Medal for community service and social welfare organisation support."

Moving directly from school into the family business Sharpe Bros, Michael built a highly successful career in a key Australian infrastructure industry. Sharpe Bros is a multi award winning leader in the roads industry, providing innovative services for road surfacing and maintenance operations throughout Australia. The company can trace its roots back over three generations and more than 65 years.

Sharpe Bros was awarded Business of the Year in the Gosford City Australia Day Awards and is a winner of the Australian National Safe Work Award for best workplace health and safety practices. Michael has worked with the Federal Safety Commissioner to produce a best practice case study for distribution to Australian workplaces. He has developed Patents and Trademarks for road machinery technologies designed and manufactured for the repair and maintenance of roads.

Together with his brothers, Richard and Hayden, Michael shared the recognition for their community work when the company was awarded the New South Wales Family Business of the Year by the peak body for families in business, Family Business Australia. The company has donated $25,000 to support Australian Artists through the Sharpe Bros Art Prizes.

Michael is a Former Chairman of HunterNet, a co-operative of companies in Newcastle, the Hunter and Central Coast. He was a director and acting CEO of the organisation which is widely recognised within Australian manufacturing and academia as the most successful industry ‘cluster’ of its type nationally. HunterNet involves approx 200 companies, active in national and international infrastructure and asset management, energy and resources, defence and advanced manufacturing supply chains. Through its membership, HunterNet represents over 70,000 employees.

Michael is a former director of Lifeline Newcastle, Hunter and Central Coast and supports a range of community groups across the regions including the Cancer Council where he was awarded the Highest Fundraiser as a founding member of the highly successful “Stars of the Central Coast” and the Hunter Westpac Rescue Helicopter Service where he raised funds during the Leaders Leap.

Michael is a Director of the Central Coast Local Health District which provides public health services including Gosford and Wyong Hospitals; an Ambassador for Lifeline which provides suicide prevention services, mental health support and emotional assistance; a Board Member of 5 Lands Walk Inc, which brings around 20,000 people together for a day long festival along 10kms of spectacular coastline; and a Board Member at Masonicare New South Wales & ACT which supports youth and family welfare, medical research, education, aged care and health and emergency services across the State and Capital Territory.

Michael is a Fellow of the Institute of Managers and Leaders and has completed executive education in the Leadership Initiative at Harvard Business School.

At the 2017 Central Coast Council Australia Day Awards, Michael received the Community Volunteer of the Year (Highly Commended) Award for significant contribution to volunteer service in the community.

He is a recipient of the Rotary International Paul Harris Fellow and was a committee member of the Australian Olympic Team Fund which supported the 2008 Australian Olympic Team to travel to Beijing; he is a Past President of Umina Apex Club and was Awarded the Young Apexian of the Year for the Central Coast District. He is also a member of Avoca Beach Surf Club and is an ocean swimmer. During the National Day of Thanksgiving, Michael was honoured with a Local Hero Award for service to the community.

Michael is happily married to Elizabeth. They are long term life partners, having been together since they were teenagers and married for 25 years. They have encouraged volunteering and public participation all their lives, whilst bringing up three children and involving themselves in a wide range of local sporting and community groups.