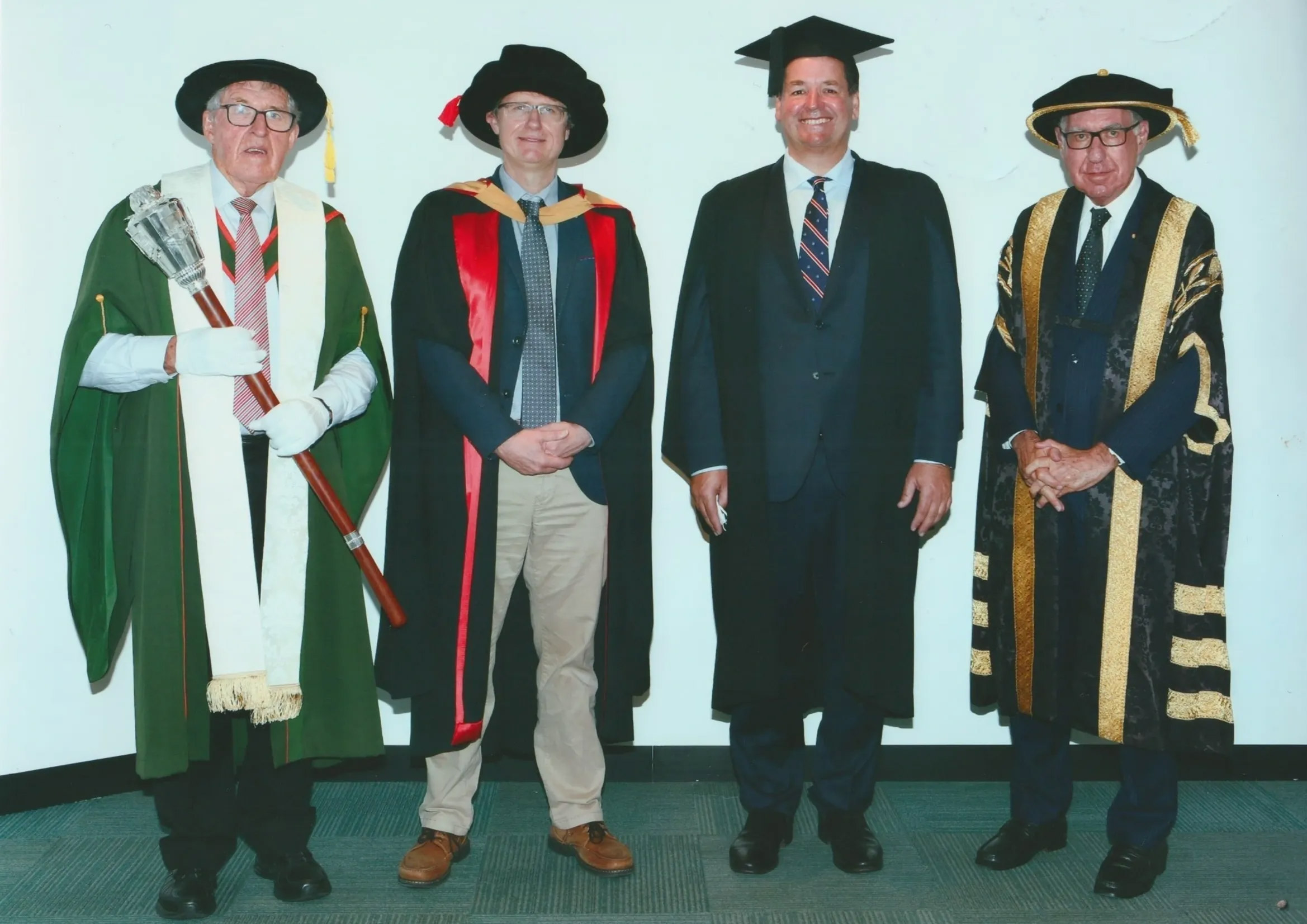 Dr Gonski - The Occasional Address is to be delivered by Mr Michael Sharpe, and at this point, I’d like to welcome his Mother, Carol, here today. We love families, and I think it says something Mrs Sharpe, that Michael mentioned you were going to be here. Long may he want to do that.

Michael Sharpe is the National Director for Industry at the Advanced Manufacturing Growth Centre. He has vast industrial experience including nearly three decades at Sharpe Bros (Australia), one of the nation’s leading road companies.

Michael has been involved with a range of industries including infrastructure, health & medical research and also manufacturing. He is an advocate for the future of energy in Australia and aims to boost skills and manufacturers efforts for access to global supply chains.

He serves on a range of our university’s initiatives including as a Steering Committee Member of The Sustainable Communities and Waste Hub and as a Member of the Industry Advisory Network for the School of Mechanical and Manufacturing Engineering.

Michael is a Fellow of the Institute of Managers and Leaders; he’s a Fellow of The Royal Society for the Arts, Manufactures & Commerce; and he’s also completed executive education in the Leadership Initiative at Harvard Business School.

It is a great pleasure for me, to ask Michael Sharpe to speak to us.

Distinguished guests, graduating students and families. Can I first note the women who have graduated today. It’s a special privilege of mine to have invited three leading women in manufacturing across the state to join the Industry Advisory Network just last year. We need more of you in manufacturing, so congratulations.

I want to thank my family for their support. I come from a family business background in roadworks and construction. I took over the business from my Dad, who unfortunately passed away just last year. As we know, my Mum is here today. Dad was a builder by profession and he was also a builder of people.

I was honoured to read out a letter from the Governor General at Dad’s funeral. General David Hurley started by writing:

“Ron was an outstanding human being and great company.”

Dad surrounded himself with good people and he picked this up from his Dad.

My Grandfather also taught me how to play the trombone at The Salvation Army where I was a Junior Soldier, and he ingrained in me a sense of community. He supported my Grandmother to form the first Meals on Wheels in our region and it’s still going today.

My Dad taught me how to drive trucks and how to operate earthmoving equipment. As the years went on, I learnt how to estimate projects and how to grow a business.

Through his actions, Dad inspired me to get involved in community works.

Dad was a President and District Governor of Apex where he was instrumental in raising funds for the first rescue helicopter outside of Sydney. It was an old MASH style Bell helicopter with a glass bubble for the pilot.

I was always going to work with Dad. As General Manager in the year 2000, I spoke at the World of Asphalt Conference and demonstrated our new technologies for road equipment. I expanded the business for road maintenance with councils across regional Australia.

And it’s a privilege of mine to work with former UNSW students today on projects like the NASA Moon to Mars Mission and some of the students are working on mining equipment for the surface of the moon for this mission. What a time to be starting your careers.

The more I got involved, the more I learnt we can all take action. As a construction business expands you need reliable systems and particularly for safety. I led the development of our programs, and we were awarded for Best Practice by Workcover. I worked with the Federal Safety Commissioner to roll out our experience to workplaces across Australia.

As a third generation, and now a fourth generation family business, Sharpe Bros was awarded the NSW Family Business of the Year. We were recognised for our community work too. I developed a series of art prizes with the Gosford Regional Gallery and invited artists from across Australia to submit their works including for The Roadworkers Prize. My concept was to bring one of my teams to the gallery to judge which painting they thought was best.

I can say on one occasion a semi-nude painting did catch their eyes. We held the events during Safe Work Australia Week. The teams could meet local artists and enjoy a morning tea together. It became an important reminder that rest and recreation along with a sense of community, all play an important role in maintaining safety in the workplace.

I served as Chairman of the HunterNet industry co-operative in Newcastle, where we helped manufacturers to expand. This led to my role as the National Director for Industry at the Advanced Manufacturing Growth Centre where I support people involved in defence and space projects and so much more.

Last year, I formed the Nuclear Skills Forum. UNSW is Australia’s premier research centre for nuclear energy and I collaborated with Dr Edward Obbard to bring the Forum to life. We’re already seeing results. Omni Tanker builds chemical road tankers in collaboration with Professor Gangadhara Prusty who’s here today. I’ve worked with them to develop new markets and worked with Australia’s Ambassador to the United States, Arthur Sinodinos, to launch Omni Tanker into Ohio. The technology is now being used in a second project with Lockheed Martin to build rocket fuel tanks for space missions.

And now through the Nuclear Skills Forum, Omni Tanker is in discussions with Rolls Royce for Small Modular Reactor technology.

Surround yourself with good people. I’ve invited Scientia Professor Veena Sahajwalla here today as a leading example. Veena and I have travelled all over Australia to share our experience whilst developing new pathways for manufacturers to innovate.

By sharing knowledge and resources, discoveries made at UNSW can be realised as technologies that can make a real difference in the world.

I’m pleased to collaborate with Warwick Dawson from Knowledge Exchange who’s here today. My mate John MacGregor is here to lend his steadfast support as always, and I want to congratulate Professor Chun Wang on his efforts with the nation’s leading School of Mechanical and Manufacturing Engineering.

I want to acknowledge the Hon Nick Greiner AC for his practical support over many years. Nick’s currently serving as Consul General in New York and with covid lockdowns we’ve only been able to catch up via email or on Zoom.

We are all working together to build a stronger Australia, and I know you’ll be part of that journey.

I built on my Dad’s experience and was invited to join the boards of Lifeline and at Masonicare, the official charity of the Freemasons. The Cancer Council co-opted me into the inaugural Dancing With the Stars to raise money for cancer research. I’m involved with the 5 Lands Walk, which has 750 volunteers to support 22,000 people on a cultural day, in partnership with the Darkinjung Aboriginal Land Council. It’s a spectacular event.

This work across mental health, medical research and placemaking led to my role as a Board Member of the Local Health District, where I helped develop the Central Coast Medical Research School and the new Gosford Hospital which included a rooftop helicopter pad.

Dad was impressed with the new hospital. He could hear the new powerful helicopters during his treatment for cancer. We talked about how far things had come since those early days of his support for the rescue helicopter service.

The Governor General concluded that:

“Ron Sharpe was not defined by his OAM. Like so many of his generation, he was - as described in one social media post after his passing - a doer. He dedicated himself to community service, particularly where he could use his skills as a builder or with his earthmoving equipment to get the job done.

“I’m informed that Ron recently became a great-grandfather. The next generation won’t know it yet, but they too will be inspired by his selfless efforts.”

Let me close by saying to you all – Get involved, Volunteer, Be a doer.

Dr Gonski – Michael, firstly, thank you so much for your speech. I absolutely agree (by the way we didn’t collaborate beforehand) getting involved is a great thing, to be a doer is a wonderful thing.

But it’s quiet interesting, when you listen to Michael, the whole of his speech is about people, which by the way when I think of professions, often it is not the case. I think Michael’s absolutely right. You savour one’s parents; savour one’s family and the family business or the approach to business even if they don’t have a business. And in addition you savour the people, from those in high office, whom you mentioned, and to those who are just walking with you in the travails of life.

Michael, you set it out beautifully. We wish you well, we thank you for addressing us and we send you every good wish.